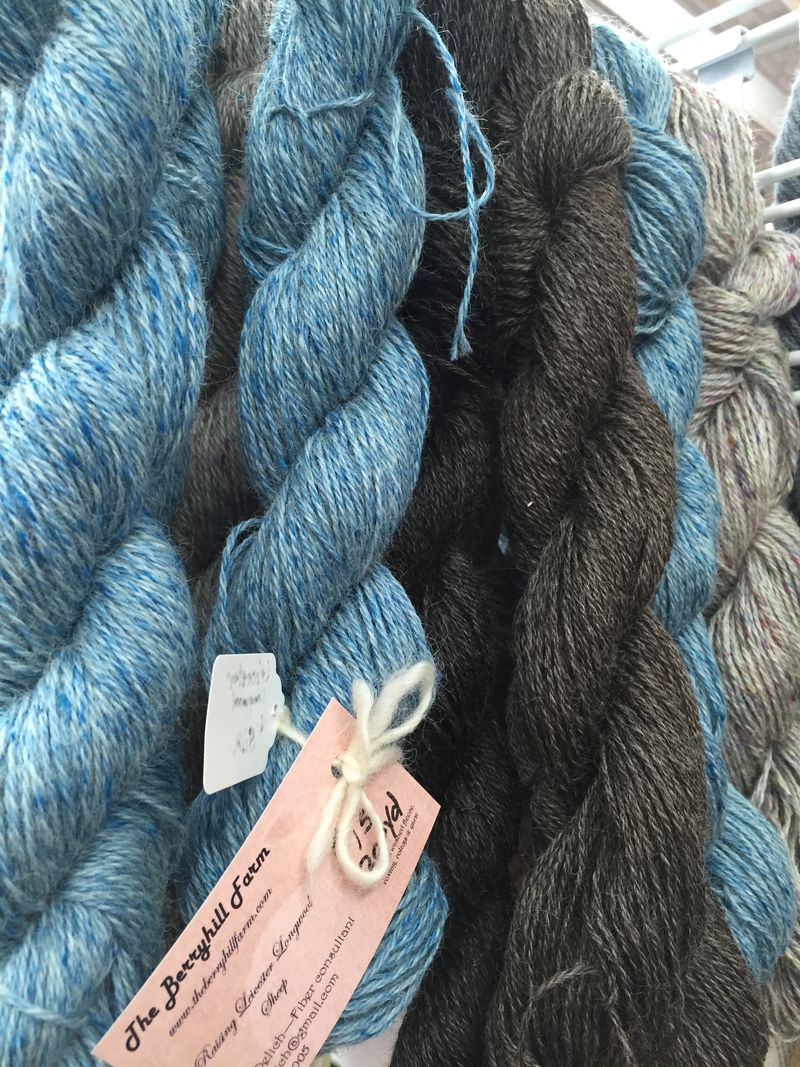 The Berryhill Farm is an ever changing hobby farm in Pine Island, MN, just north of Rochester situated in the beautiful rolling hills and farmland so typical of the area.  David and Eve Berryhill purchased this 100 year old house and accompanying buildings upon the completion of Eve’s residency at Mayo clinic about 10 years ago. David, an engineer by training, is the chief operator/caretaker of the farm (and children).  My name is Trudy Delich, Eve’s mother.  I am the Grandma, cheerleader of all things farmy, and chief manager of the fiber part of the sheep adventure.
The adventure began once upon a time (and shortly after the purchase of the farm) when David and Eve were visiting us in northern MN at “the lake” and found an article about a rare heritage, critically endangered breed featured on the front of an agriculture magazine, namely the English Leicester Longwool (or Leicester Longwool) I had purchased for pure enjoyment.  They had been looking for “grass control” and something to fit into the special niche at their newly purchased farm.  The English Leicester Longwool was at one time one of the most popular breeds world wide and is the sheep found at the Colonial Williamsburg Farm as the representation of the authentic breed during that period of history.  It is the foundation breed for many of the existing and present long wool sheep. It was the breed that populated the pastures of George Washington and Thomas Jefferson in great numbers.  The Leicester (“Lester”) was imported back into the USA after becoming extinct here. Now a purposeful effort is being made by the Leicester Longwool Sheep Breeders Association to reestablish this breed. This is a stocky sheep with a lovely face, and producing long, strong and lustrous wool.  This is not next to the skin wool.  It is durable, hardy and often would be used in outer garments, rugs, bags, purses, etc.  I have used it to felt and with fellow-vendor Tiffany’s blending boards.  I love this wool!!
An exciting turn of events that confirmed David was on the right path, was his trip to the Maryland Fiber Festival in May 2015.  He showed five sheep (two with lambs at their side) at the card grading event.  There were three outstanding judges from around the world and USA who are particularly well known for their knowledge of this breed.   All five of his sheep received blue cards (the best!)  as being excellent representatives of the breed.  A card grading event is not graded on a curve like conformation showings where someone always is a winner.  Rather each sheep is graded against the standard.  All can succeed or fail miserably.  The Berryhill Farm sheep received the largest award of Blue cards.  The thrill of this affirmation cannot be properly portrayed (unless you raise animals toward that end as well.) David had been somewhat isolated in these first attempts but is now quite enmeshed in the LLSBA.

These days, David is immersed in producing better and better sheep with more and more diverse genetics (his interest). The Berryhill Farm is also a teaching farm for the University of MN where student veterinarians come with their instructors to learn from the procedures done (including neutering any barn cats!)  He has graciously given generous free reign to me (Trudy) to work with the fiber.  We are also in the process of putting up an agriculture building on the farm to accommodate fiber production and hope to have it completed by the summer of 2016.  I am “in process” of learning about this wool and what it does best.  The joy of having this farm to work from (and play with wool) is beyond my wildest dreams.  I have always loved farms and can’t believe I have this opportunity (I have also always loved making things and fibers in general).  The opportunity to learn from an incredible array of women (mostly) at Anoka Fiber Works has been a serendipity also not imagined.  I am constantly amazed and in awe at the talent found there. At the farm we hope to have a sheering in the fall and open it as a fun event to invite folks to.  Maybe we will see you there!

Also find us at: